This recognition will allow them to represent Peru in the Cocoa of Excellence Paris 2021 competition.

Piura and its committed producers have once again demonstrated the quality of their cocoa: two cocoa associations from Morropón came first and second in the XIV National Quality Cocoa Competition, organised by the Peruvian Association of Cocoa Producers – APPCACAO. As a result, they qualified directly for the Cacao de Excelencia Paris 2021 competition, where they will compete against beans from all over the world.

“Because of the high quality of the product that we have, we won the prize for the great white cocoa. Twelve regions competed, but we came out on top,” says Yhonny López, one of the 35 farmers who make up the La Quemazón Association of Small Farmers, which won first place in the contest that evaluated 70 cocoa samples from all over the country. 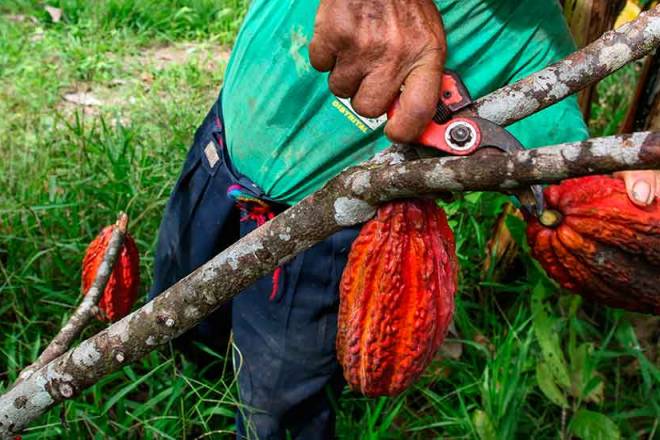 Like them, another 50 cocoa producers from small family farming won second place in the competition held last January. They are the “Asociación de Pequeños Productores de la Margen Derecha Sub Cuenca Yapatera” (Association of Small Producers of the Right Bank Sub Cuenca Yapatera). Genaro López, one of its members, comments: “Our cocoa is accompanied by other products such as mango and mandarins so that it has a good aroma and the taster finds a very rich and fine flavour”.

Both associations, located in the districts of San Juan de Bigote and Chulucanas, improved the productivity of their fine aroma organic cocoa after accessing the co-financing of Business Plans for the adoption of Agroideas technology from the Ministry of Agrarian Development and Irrigation (Midagri). The investment in each of these organisations included the acquisition of a processing and drying module for their cocoa, motor hoes, vans, fertilisers and agricultural inputs, as well as technical assistance.

After the implementation of these Business Plans, the farmers of La Quemazón increased their total production from 19 to 24 tons of cocoa for export, while the members of the Yapatera Association increased their land from 600 to 800 kilos per hectare. The white cocoa of both organisations crosses borders and reaches the United States, France and Italy through indirect exports with the company Norandino.

Up to date, Midagri, through Agroideas, has approved a total of 85 Business Plans in the cocoa production chain, in favour of 6,000 producers in the regions of Amazonas, Ayacucho, Cajamarca, Cusco, Huánuco, among others. The investment involves S/30.6 million from the State and S/11 million from the agrarian organisations that have managed to repotentiate more than 14 thousand hectares dedicated to this crop.