The world will get to know Huaca Montegrande, where history's oldest cacao was found

Huaca Montegrande, the place where the oldest cacao in history was found (over 5,300 years old) —located in Jaen province, Cajamarca region's Amazonian jungle— will be known by the world thanks to a documentary produced by PBS —a public television network in the United States.

The PBS film crew is led by renowned British-Canadian anthropologist and documentary filmmaker Graham Townsley. The team is already in Jaen. One of the protagonists of this documentary is Peruvian archaeologist Quirino Olivera —discoverer of Huaca Montenegro.

Also participating in this visit is Brazilian Eduardo Neves —one of the world's top specialists in Amazonian archaeology.

The team, whose members arrived in Jaen on February 26, will stay there until March 4.

Olivera led the group of archaeologists composed of Peruvian and Ecuadorian citizens, who began excavations on both sides of the border back in 2009.

In 2012, Peruvian researchers found a "spiral-shaped architecture" in Jaen. Olivera believes that time has the shape of a coiled serpent —an important symbol found in nearby sites.

"It has the shape of the Nasca monkey tail, the spiral of Peru Brand," he pointed out.

The architecture is surrounded by "outstretched arms" that wrap the whole towards the center of the spiral, where there is supposed to be a tomb.

A similar archaeological site was found a short time later in Ecuador.

In 2014, the team unearthed the Montegrande archaeological temple, under an abandoned modern Catholic church, which was a dump and smokehouse —just five minutes from the city of Jaen. 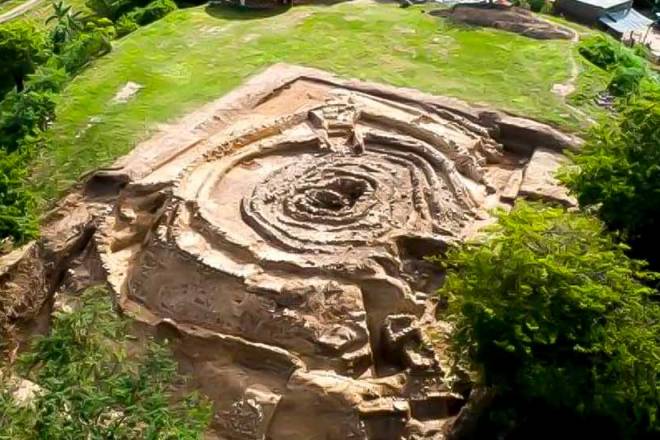 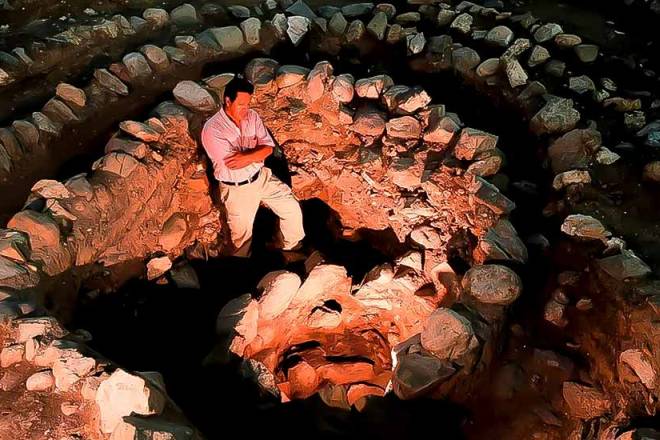 The civilization that built the temples in Peru and Ecuador is more than 5,000 years old and would be the cradle of cacao. Its remains are located in the Chinchipe-Marañon binational basin.

"Where 20 years ago a conflict took place, now archaeologists work together to investigate the past because we are one people," Olivera stressed.

The first monumental architecture was discovered at the source of Mayo Chinchipe River, in Ecuador, where 32 carbon-14 dating (tests) were carried out, which made it possible to identify a fermented drink of Theobroma cacao, while it was thought that this fruit had originated in the Mesoamerican region —related to the Olmecs.

"Archaeological evidence indicates that it would be found in the upper part of the Chinchipe-Marañon binational basin, evidence of 2,000 years before the Olmecs; that means 5,500 years old. That makes it the oldest cocoa in the world," said Olivera, who believes that this culture should be called Marañón —in honor of the most important course in the Amazon.

"According to the research, cacao was in wild state in the Amazon. What we are looking for is to identify when it was domesticated; (that is) a fundamental process because cacao is vital for rituals and is present in the most important elements of our cultures: stone, gold, lapis lazuli, and the Spondylus shell necklace, which was worn by the Lord of Sipan. Now we conduct research on a model found in Huaca de la Luna, where Amazonian characters carry a large cacao," he added.

First monumental architecture of the Amazonia

Huaca Montegrande is the first monumental architecture in the Amazonia dedicated to veneration and religious worship. It is formed by a great 400-meter stone spiral around which a large number of archaeological remains have been found, such as: ceramics, artifacts, human burials, and hearths.

The spiral is the oldest and most universal symbol in the history of mankind and its meaning is linked to the beginning and end of life.

Montegrande is connected, through the Chinchipe River, with another similar huaca located in Palanda, Ecuador, where the oldest cocoa in the world was found.